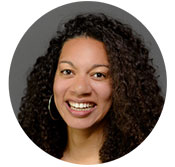 Faith in Action describes itself as a network that supports and connects faith-based, progressive groups that do community organizing. In addition to amplifying campaigns that address racial inequities and racism across the country, the organization is taking steps to teach its own members how white supremacy, anti-Semitism, and Christian hegemony work and intersect. Megan Black, who is shaping this work, talked with RPF about the power of pain and pushing through conflict.

RPF: This moment in American history makes it a busy time for groups interested in social justice. Where is Faith in Action focusing its attention?
MB: We’re focused on immigration reform, ending gun violence, transforming the mass incarceration system, economic justice, and improving access to health care—all through the lens of racial equity and justice. We work closely with clergy and congregations across the country who want to transform their communities, and these are the things they are talking about now. This is where the pain is felt.

RPF: What brought you to community organizing?
MB: I was fresh out of college, doing social work at Mercy Home for Boys and Girls on the south side of Chicago. Some of the young men I was working with were immigrants and others were born in Chicago. And as I got to know them, I had lots of questions about why they were in the situations they were in. I wanted to understand what was happening upstream sending all these boys into this institution—because we never had a shortage of young boys seeking help—and I didn’t have a way to figure that out. That’s what got me into organizing.

RPF: Your title is National Clergy Organizer. What does that mean?
MB: A lot of bridge-building.

Clergy are under increasing pressure to respond to the craziness of this moment, and many see organizing as a way to do that. I plug them into spaces where they can lean into their own practice, invite their congregations in, and work alongside organizers in this deep, transformational work.

I also help organizers figure out how to bring the pain they witness on a day-to-day basis into the view of clergy who share a commitment to witnessing and responding to pain in their communities.

RPF: We met a year ago at a convening you co-facilitated in Los Angeles for Faith in Action on the topic of anti-Semitism. Incidents of anti-Semitism in this country were already on the rise, but at the time not everyone you invited felt like it was a topic worth pursuing. Why?
MB: They didn’t see anti-Semitism as an urgent threat or something even connected to the prevailing narrative of our work, which is around racial equity and racial justice. To go deeper into that, they thought of anti-Semitism as a white person’s problem. They wanted to know why we were talking about white people’s problems when we have so far to go on Islamophobia and racism and racial violence.

RPF: You heard all that and held the convening anyway. Why?
MB: These things do all hang together. We can’t just leave one off because we don’t think it’s a big deal. I talk a lot about Dr. john a. powell’s Circle of Human Concern, and how it’s our job to keep broadening that circle of concern. It became clearer and clearer to me that if we didn’t talk about anti-Semitism, we were tightening, not broadening, Faith in Action’s circle, and also missing something really important. We had to convince those organizers who felt differently that anti-Semitism is part of the puzzle. We made headway and then, unfortunately, the news cycle proved the point.

RPF: What did that experience and all the work you’ve done since teach you about multi-faith spaces, the progressive movement, and where we are today?
MB: Speaking as a non-Jewish black woman, trying to understand anti-Semitism led me to revisit aspects of modern history that I haven’t spent as much time with, and that’s given me a really different perspective on the moment we are in now. It’s cooled some of the existential fear I have for our country. I still feel those things, but I am astounded at the quality of conversation happening right now around not just anti-Semitism but racism, sexism, Islamophobia, and the rights of differently abled persons. People are making connections between these things in a way that’s remarkable, and that gives me hope. And when you get out and talk to them, people in surprising corners have deep, nuanced thinking on these issues, vulnerable questions, and a hunger to connect.

In addition,these issues are helping us work the muscle of being in relationship with each other and moving through conflict. The progressive movement is learning what it looks like to hold allies accountable and move together through hurt to a place of deeper relationship. These conversations, as painful as they are, are providing a model for how other groups can engage each other meaningfully across difference.

RPF: You spoke at the Religious Action Center’s Rabbinic gathering in December, and a woman in the audience asked you why people weren’t in the streets demanding change. I remember you giving the most beautiful answer about the power of proximity. Do you remember what you said?
MB: I do. I said, “If you are not in the streets, it’s because you are not close enough to the pain.” There was a rabbi a few tables over who I knew had just had an encounter with an undocumented woman that transformed his thinking about the plight of immigrants and pushed him into the streets. The closer he got to that undocumented woman, the more he felt that he and his congregation had to take action. I was thinking about his experience as I answered.

The point is not to wait and join the movement when it happens. It’s to put yourself in a place where the movement happens to you. Organizers and clergy need to be willing to put ourselves in the fire. That’s liberation theology through and through.

RPF: What’s something you’ve learned from working with clergy of all faiths?
MB: How powerful faith is. I never cease to be amazed at the ways in which clergy invite being pushed because of their belief that they are called to something higher. When they lean in, they lean in harder than anyone else. That inspires my own faith.

Also, clergy hold this deep sense of what should be alongside the very practical knowledge of what is: What it means to preach at a funeral or preside over a wedding or help a couple navigate tensions in their marriage. That makes them really good at thinking broadly and narrowly at the same time. Organizers struggle to keep up with clergy in that way, because for them, everything feels so urgent.

RPF: Where does Faith in Action—where do we all—go from here?
MB: We are at an unprecedented level of relationship and accountability, and still we need to invest more in creating spaces where we can really see each other, be with each other, and act together.

I see people all across the field bringing in new voices and holding tensions and living into them. That counteracts the narrative of complete and total pain, and it allows for resilience and growth and healing. It’s also how we create a social dynamic that ultimately has more power than policy. Creating bonds that survive anything—that’s how we move forward.