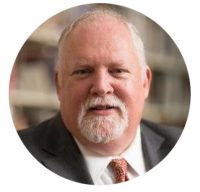 Facing History and Ourselves (FHAO) may be experts in the past, but the 41-year-old nonprofit dedicated to teaching and contextualizing the history of the Holocaust is focused on the future: In 2016, FHAO put into motion plans to engage more than 100,000 educators across the U.S. and to produce and disseminate rapid-response curriculum relating to current events. One of Righteous Persons Foundation’s earliest (and present) partners, we invited the org to participate in the inaugural edition of “Righteous People, Righteous Work,” our new grantee Q&A. President and CEO Roger Brooks raised his hand.

How do you describe what you do for people who aren’t familiar with FHAO?
RB: In two different ways. The first is to say we combat bigotry and prejudice through education. Hopefully that starts a conversation. When people have time for a longer answer, I’ll challenge them to think about what the world would be like if it was shaped by knowledge and compassion. That’s the world we are trying to build through education. To go even further, I’ll explain that we work with teachers of adolescents who are at that age when they are most vulnerable to the forces of isms—racism, sexism, anti-Semitism, and others.

FHAO has been around for 40 years. How has its work evolved?
RB: We started out as an organization that was interested in the Holocaust. Over time we came to realize that many ways of thinking about anti-Semitism help illuminate the problems of racism. So we added that second layer and show the commonalities between these two phenomena. Another shift is more recent: We’ve started looking at events you would call contemporary instead of history. We have a new unit out on Ferguson and we have materials on Charlottesville. We’re looking at how we can take the things we’ve learned from looking at history that’s 20, 30, or 50 years old and ask, What can it tell us about things that happened two years or two weeks ago? That’s a fundamental shift.

For most teachers and students, the violence in Charlottesville happened just before this school year started. What was the reaction from teachers?
RB: “How do I begin?” Our teachers need a way to get the conversation started. Some students in Memphis were starting school the Monday after Charlottesville, and one of our teachers asked if a Facing History program associate could come in and help that first day. The program associate went, and they asked the students what they were thinking about what happened. A young man—I think he was in the 10th grade—raised his hand and said, “I’m not exactly sure I know what you’re talking about.” Two-thirds of the students said they didn’t know what had happened in Charlottesville. They had no idea. That points to something surprising: These kids are so plugged in and on social media so much that it’s almost unthinkable that they wouldn’t know what was happening. But they curate their social media experience so carefully, they don’t necessary have a connection to the news.

What are you hearing from teachers and students now?
RB: Since Charlottesville and the DACA decision, we’re hearing about a lot of fear on the part of students. They used to worry that there would be a deportation in their family. Now some of these same students are worried about, Is it going to me be? Is it going to be my friend? We’re hearing a lot about fear and anger about White Supremacy. Neither fear nor anger make for a good school environment.

A lot of commentary posits that these events “set us back.” From a historical perspective, have we experienced this before? Or are we actually somewhere new?
RB: Are we living in Weimar America? I think not. There are certain structures that are different in our democracy. Our democracy is older, more mature. But are we less far along the path of healing from decades or even centuries of treating each other poorly than we were? I think we are. We have a lot more to do now than we did a few weeks ago when we had plenty to do.

Look, anti-Semitism and racism are both pernicious in the U.S. The ADL tracks anti-Semitism, and for a couple of years acts of anti-Semitism were down. They came back up in 2016 and especially in 2017, but what’s making this moment really unusual and maybe something new is this super potent combination of White Supremacy and neo-Nazism. If you scratch the average anti-Semite, you’ll find a racist and vice versa. That’s what we saw in Charlottesville.

What would you tell every student about racism and anti-Semitism if you could?
RB: People make choices and the choices they make make history. Choose wisely. How you behave and the choices you make are absolutely going to shape the future of the world.

And what history lesson most shaped you?
RB: There’s a story about Rabbi Yohanan ben Zakkai after the destruction of the temple. His students asked him, “What do we do? Do we blow the shofar or not?” The temple was gone. And he said you go ahead and you blow the shofar anyway. It’s a moment of perseverance in the face of history that’s really inspiring.