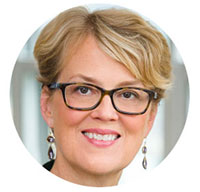 You’ve been president of Auburn for 10 years. How has the organization evolved?
KH: When I became president, we pivoted to focus all of our resources on equipping leaders to create the just world that we are longing for. Auburn had done multi-faith work, leadership development, and research, but focusing on the work of justice was new. Today, Auburn’s work is the “so what?” of multi-faith engagement. It’s not only to learn about each other’s traditions or sing “Kumbaya,” but to answer the call of people around the world asking us, as people of faith, to work with them to address the urgent desire we all have for justice.

Some people think religious leaders should not speak from the pulpit on politics or current events. I know you disagree. Why?
KH: My father was a professor of Hebrew scripture in a Presbyterian seminary, and he and my mother, who had grown up in the segregated South, were very involved in racial justice issues. So I was taught early on that being a person of faith was not only about sitting in a pew to worship and pray, but that your faith led you to shape the world we live in. I was taught that the church is in the streets, that the synagogue is in the streets, and that the people of God go where there is the greatest need.

I also believe that people are not made to be their worshiping selves over here and their professional selves over there. We’re meant to be whole people, which means that our faith must affect the ethics we live by. When we’re compartmentalized, we are divided selves, and we’re separated from God.

But it’s important to add that the leaders we work with—I’ll include myself—drink deeply from the wells of sacred text, tradition, and ancient wisdom. As a Christian for whom text is important, this means not just listening to the parts of the Bible that make us feel comfortable and comforted. It means listening to the parts of the Bible that challenge and push us forward into uncomfortable spaces, holding up a mirror to where we fall short as individuals and a society related to justice and care for other human beings, all made in God’s image.

Given the deep divisions we’re seeing in American life today, what do you think could—and should—be the role of religious leaders in this country?
KH: The role of the prophet has always been to read the signs of the times and speak truthfully about what they see; to denounce the abuses of power and privilege;  to offer comfort—particularly to those most in need; and to cast a joyful, compelling vision about the possibilities for a just and generous future for all people.

What we’re seeing now is progressive leaders from many faith traditions—Christians, Jews, Muslims, Sikhs, Buddhists, humanists, people of moral courage—realizing their own power and potential to work together for good, and demonstrating the possibility of religion as a force for good. I see that in the work of Auburn Senior Fellows like Rabbi Sharon Brous and the Bishop Dr. William Barber and thousands of leaders on the ground, working together to stand up for the most vulnerable in our midst. Today, that includes the people who will be most negatively impacted by the tax code; immigrants, including DACA holders; people who don’t earn a living wage and for whom growing economic inequality is particularly pernicious; LGBTQ folks; and Muslims, Sikhs, Jews and other religious minorities.

Naysayers might point to generational shifts around organized religion and argue that the voices of religious leaders can only travel so far.
KH: There’s definitely a changing role of religion in our society, and people are not gravitating to organized religion in the ways they have in the past. That’s particularly true of younger people. At the same time, we work with younger people around the country who may not be using religious language, but who are hungry for community, and whose activism is fueled by what some call the shared “spiritual imperative.” Americans are spiritual people and the numbers demonstrate that. But leaders of faith and moral courage need to articulate what we are for, not just what we are against.

To that end, Auburn is embarking with support from RPF on a multi-year project to test and identify messages about deeply held American values. You’re looking for a vision and language that will effectively move people across lines of difference.
KH: Yes. If we’re going to bring people together around a vision for the future of this country, we have to understand more about what resonates across the country with different populations. For example, the word stranger for some people is scary. So when we say there’s a Biblical mandate to welcome the stranger—not just the neighbor you know, but the stranger you don’t—that’s really scary for some people because they’ve been taught not to relate to strangers. We need to lower anxiety and fear and spark people’s moral imaginations. We have to invite people in and let them know that we all belong to one another.

What—to your mind—is at stake?
KH: The rule of law. The basis of moral living. Care for the most vulnerable. Our identity as Americans and global citizens. The future of our country. There has always been a vision of America that’s inclusive and a haven for immigrants and people from all over, and we’re at risk of losing the possibility of being a true democracy. Everything is at stake, and everything we do from this moment forward is of great consequence.

You mentioned Rabbi Sharon Brous, who was interviewed by Emma Green for The Atlantic. Green describes the emerging religious left as “tentative.” Is that how you see it?
KH: I don’t. Those of us who are in the progressive faith movement see its expanding contours. Just five years ago at Auburn’s MountainTop gathering we were asking: Is there a multi-faith movement for justice? Now, there is no question. It’s growing across the country. We see it in the work that Dr. Barber is doing building a moral revival and launching the Poor People’s Campaign. We see it in his going to Brous’ congregation in L.A., and we see it on the streets where rabbis and ministers and imams and others are working together around health care policy. There is a movement. Is it a well-funded movement? Is it as well funded as religious movements on the Right have been? No. Funding and investment in this urgent work need to catch up with the possibilities that leaders are offering.

But this is also a moment of hope and tremendous possibility for creating the America that has never yet been but that yet can be. All of us together are writing the future story of America.